Eye Doctors You Can Trust

Get Google Maps Driving Directions To Our Clinic ➔

For more than five decades, Little Rock Eye Clinic has been Central Arkansas’ resource for complete eye health — from eye exams, to contact lenses and glasses, routine eye care, eye surgery and treatment of complex diseases. To begin your journey toward better eye health, Schedule with an eye doctor today. 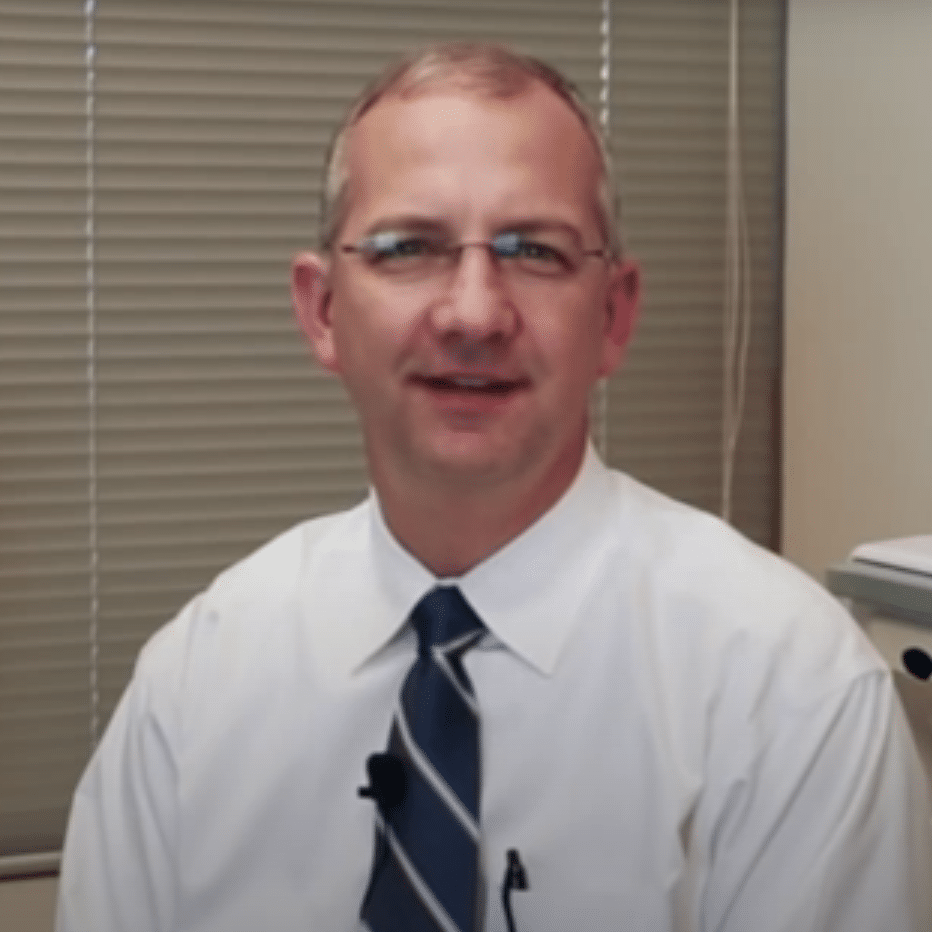 Dr. Baltz is a native of Pocahontas in Northeast Arkansas. He attended the University of Arkansas at Fayetteville where he earned his bachelor’s and master’s degrees in agriculture. Dr. Baltz considered going to veterinary school but found he was drawn to “people” medicine.

He earned his Doctor of Medicine at the University of Arkansas for Medical Sciences in Little Rock, where he completed a transitional internship and ophthalmology residency. Dr. Baltz is board certified in ophthalmology by the American Academy of Ophthalmology.

Tracy and his wife Kathy live in Little Rock and have two children, Nathan and Isaac. They are members of Our Lady of the Holy Souls Church. The couple enjoys outdoor activities such as camping, hiking, fishing and many sports. 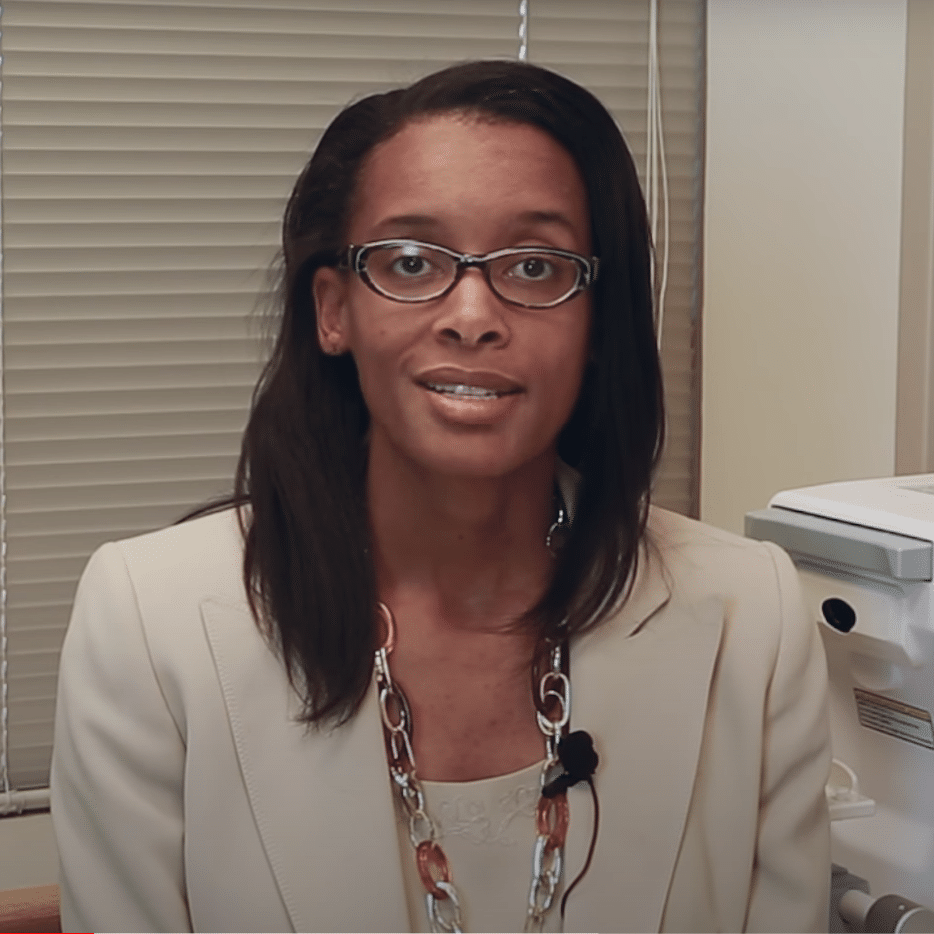 Dr. Hall was born and raised in Little Rock, Ark. She graduated co-valedictorian from Joe T. Robinson High School and went on to complete a bachelor’s degree in chemistry at Duke University. She attended medical school at the University of Arkansas for Medical Sciences (UAMS).

During her medical school training, she became a recipient of the National Medical Association Ophthalmology Research Award and published in Archives of Ophthalmology. After earning her Doctorate of Medicine, she completed an internal medicine internship at UAMS.

Following her internship, she began her residency in ophthalmology at UAMS and was the recipient of the Raymond and Mary Morris Annual Ophthalmology Resident Award in 2005. During her residency, which she completed in 2007, she was involved in research that resulted in publication.

In her free time, she enjoys vegetable gardening, running, and spending time with her two boys, Aiden and Eli. 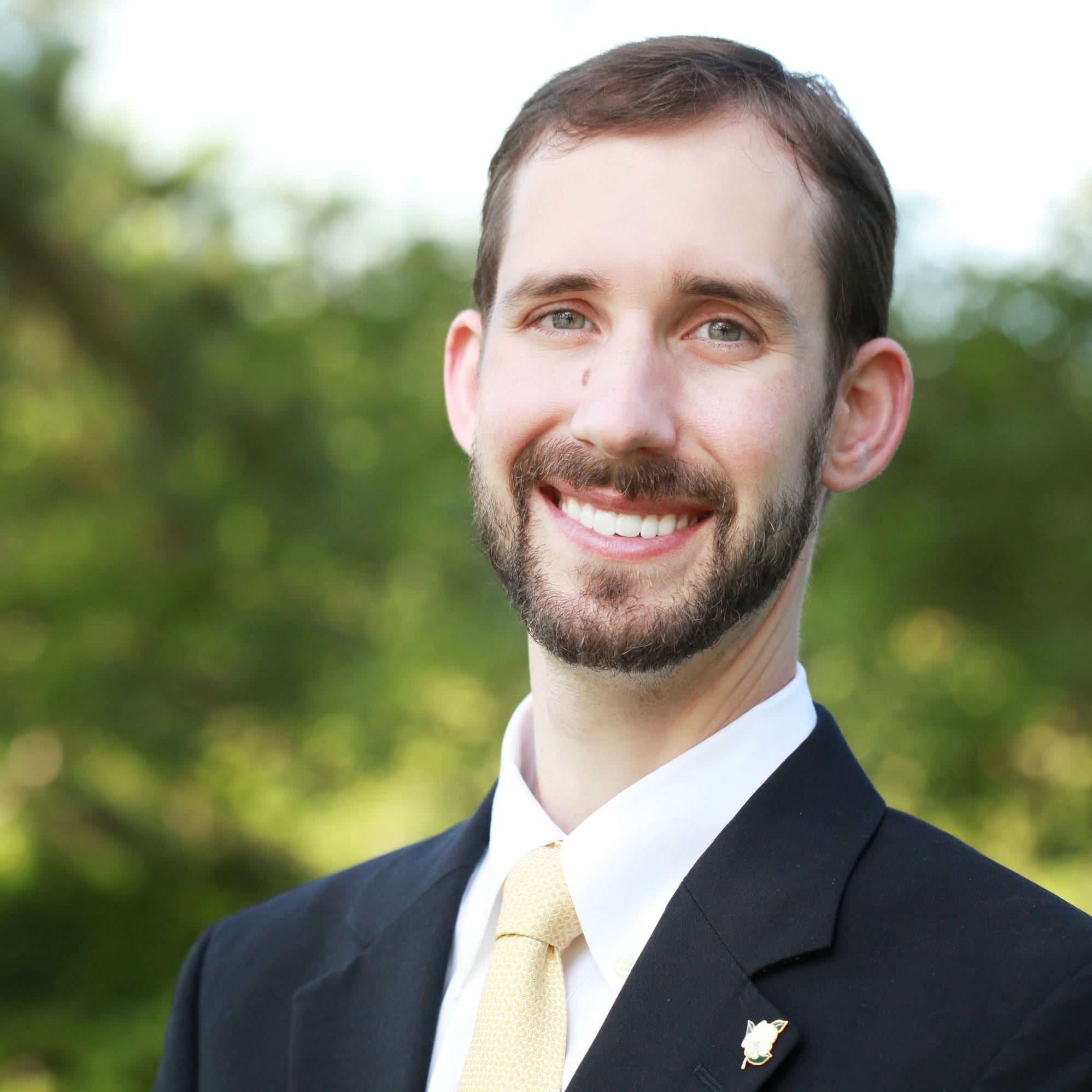 In order to learn advanced subspecialty surgical techniques, Dr. Hester completed a fellowship in cornea, refractive, and anterior segment surgery at the Cullen Eye Institute at the Baylor College of Medicine in Houston.

After graduating as the valedictorian from Magnolia High School in Magnolia, AR, Dr. Hester attended Hendrix College in Conway, AR. There he served as president of the Student Senate and founded Arkansas EDU, an organization that united all 19 four-year colleges and universities in the state with the goal of advocating for higher education issues in the State Legislature.

Dr. Hester received his Doctor of Medicine degree and completed his internship at the University of Arkansas for Medical Sciences, where he served as president of his medical school class. While at UAMS, Dr. Hester received numerous awards, including the Ethel Brickey Hicks Scholarship, Dean’s Office Scholarship, and was inducted into the national Alpha Omega Alpha Honor Society. Dr. Hester completed an ophthalmology residency at the California Pacific Medical Center in San Francisco, where he served as chief resident.

In order to learn advanced subspecialty surgical techniques, Dr. Hester completed a fellowship in cornea, refractive, and anterior segment surgery at the Cullen Eye Institute at the Baylor College of Medicine in Houston. Dr. Hester has served on the Arkansas Medical Society and California Academy of Eye Physicians and Surgeons Board of Trustees. He also held several leadership positions in the American Academy of Ophthalmology. Dr. Hester is married to Tammy and they have two children, Catherine and Caroline. 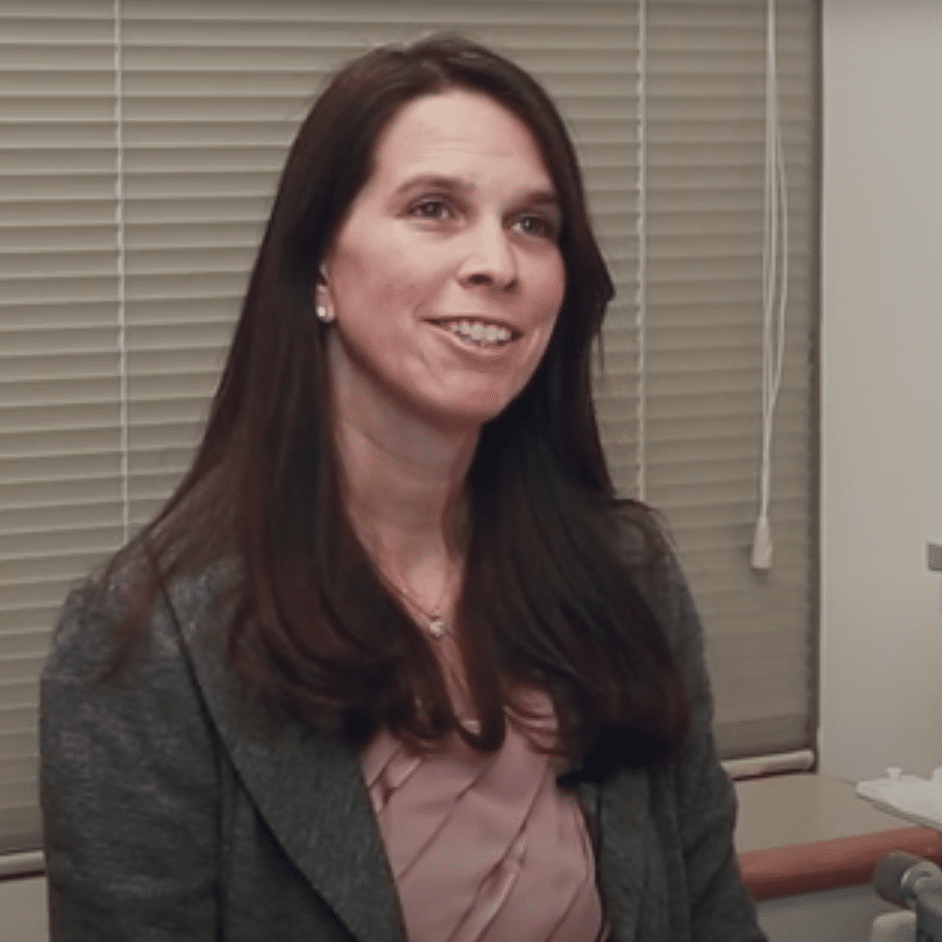 Dr. Lane is board certified in ophthalmology by the American Academy of Ophthalmology and specializes in the medical and surgical treatment of glaucoma.

Dr. Lane is board certified in ophthalmology by the American Academy of Ophthalmology and specializes in the medical and surgical treatment of glaucoma. She completed her subspecialty fellowship training in glaucoma at Washington University in St. Louis, Mo., in 2004, and has been practicing ophthalmology in Arkansas since then.

During her residency she was the 2003 recipient of the Pepose Young Investigator Award and the DUAG (Deutsche Uveitis-Arbeitsgemeinschaft) International Award in Clinical Uveitis in Berlin, Germany, for her research on inflammation in the eye. She received the Golden Apple Award for residency training during her fellowship..

Lydia enjoys spending time with her twin sons, Caleb and Taylor, as well as boating, hiking and making candles. 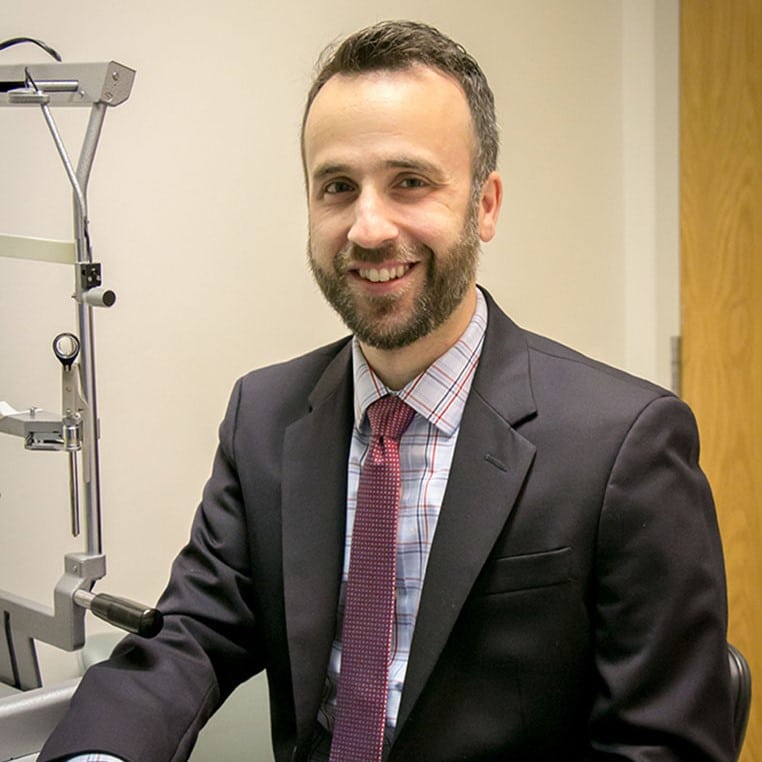 Dr. Morshedi’s clinical interests include the medical and surgical management of glaucoma and cataracts, as well as complex anterior segment surgery.  He also maintains an active interest in international ophthalmology, having completed educational and surgical mission trips to Nepal, Ghana, and Micronesia.

Dr. Morshedi is a board-certified ophthalmologist and glaucoma specialist.  A native Arkansan, he graduated magna cum laude from Hendrix College in Conway with a BA in Chemistry.  He then received his medical degree from UAMS College of Medicine, receiving both the prestigious Roberts and Buchanan Key awards.  He completed an internship in the Department of Internal Medicine at the University of Utah in Salt Lake City, followed by an ophthalmology residency at the renowned John Moran Eye Center at the University of Utah.  He then completed a fellowship in glaucoma and advanced anterior segment surgery at the John Moran Eye Center.

Dr. Morshedi’s clinical interests include the medical and surgical management of glaucoma and cataracts, as well as complex anterior segment surgery.  He also maintains an active interest in international ophthalmology, having completed educational and surgical mission trips to Nepal, Ghana, and Micronesia. 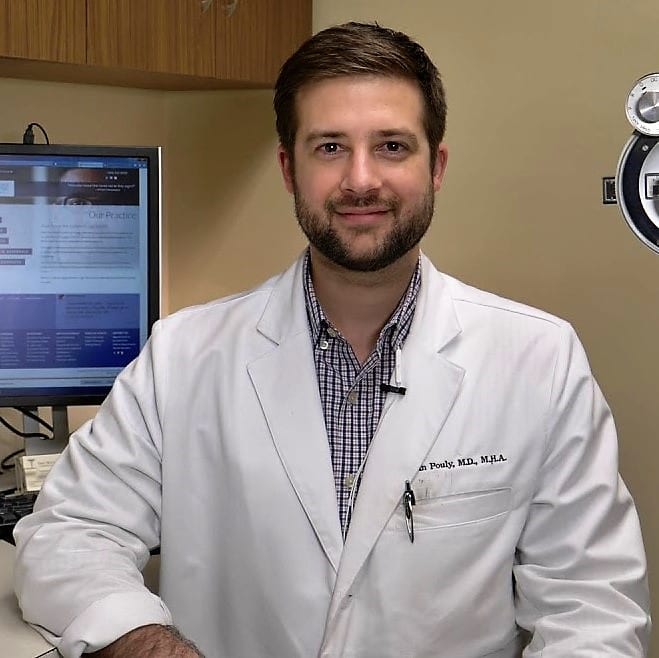 As a cornea transplant, cataract, and refractive surgeon, he is able to provide comprehensive treatment for diseases of the surface of the eye including diseases such as keratoconus, Fuchs’ endothelial dystrophy, and post-cataract corneal swelling.

After graduating from the Ohio State University College of Medicine in 2012, Dr. Pouly completed a residency in ophthalmology in 2016, and a cornea, cataract, and refractive surgery fellowship at the Moran Eye Center at the University of Utah in 2017.

He is excited to be moving closer to family, who live in North Little Rock, and joining the Little Rock Eye Clinic on August 1, 2017.  As a cornea transplant, cataract, and refractive surgeon, he is able to provide comprehensive treatment for diseases of the surface of the eye including diseases such as keratoconus, Fuchs’ endothelial dystrophy, and post-cataract corneal swelling.

In addition, he has extensive experience performing routine and complex cases involving cataracts and the lens of the eye, astigmatism management, as well as ocular surface tumors such as pterygium, or ocular surface cancers.  He trained at one of the United States’ premier programs for cornea transplantation as well as refractive surgery, and has extensive experience in thoroughly evaluating and performing both routine and complex refractive surgeries such as LASIK and PRK surgery. 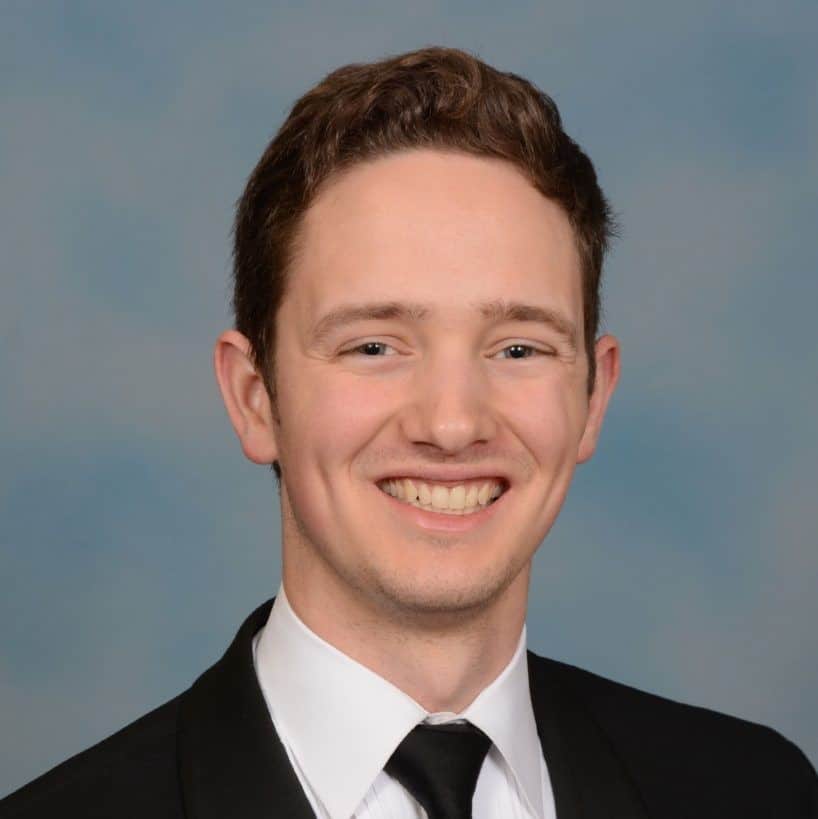 Dr. William Wooten grew up not too far from Little Rock, in the neighboring town of Conway. After graduating from Conway Christian High School, he went on to attend Ouachita Baptist University, where he earned his Bachelor’s degree in Biology. Following his undergraduate studies, Dr. Wooten received his Doctor of Optometry degree from Southern College of Optometry in Memphis, TN. He completed externships at both Hall Eye Care in Pine Bluff, AR and Woolfson Eye Institute in Atlanta, GA during his time in school. He is an active member of the American Optometric Association and the Arkansas Optometric Association. Dr. Wooten specializes in primary care optometry with emphasis in ocular disease and contact lenses. Dr. Wooten fits a variety of contact lenses including Rigid gas permeable and Scleral contact lenses.

Dr. Wooten and his wife, Dr. Laura Wooten, live in Conway with their daughter Olivia. They are happy to be able to call Central Arkansas home once again. In his free time, he enjoys spending time with family, friends, and their beloved pug, Winston. He also enjoys playing tennis and the bass guitar at his local church. 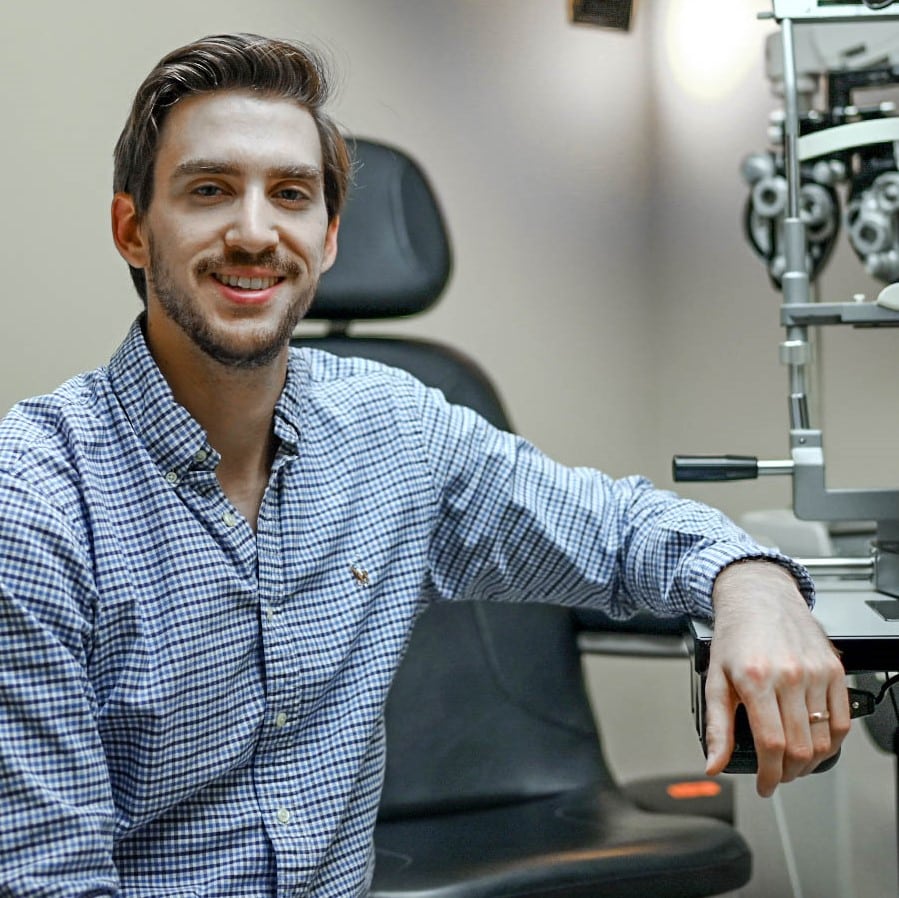 Dr. Nathan DeClue grew up in North Little Rock and graduated from the University of Arkansas with a Bachelor’s degree in Biology. After his undergraduate studies, Dr. DeClue attended Southern College of Optometry in Memphis, TN where he graduated summa cum laude. During Optometry school he completed clinical rotations at The Eye Center in Fayetteville, Arkansas and Coastal Vision Center in Fernandina Beach, Florida. He is an active member of the Arkansas Optometric association and the American Optometric Association. Dr. DeClue provides routine primary eye care exams, prescribes glasses and contact lenses, and diagnoses and manages a variety of ocular diseases and visual issues.

Dr. DeClue lives in Little Rock with his wife, Dr. Caitlyn DeClue, who he met while in optometry school. In his free time he enjoys, hiking, basketball, Olympic weightlifting, and reading.

What OUR PATIENTS are saying

Little Rock Eye Clinic has provided professional eye treatments to thousands of happy eye patients over the years. Below are but a few of our Google reviews.

My grandson had an appointment with Little Rock Eye Clinic and I was a little nervous. The customer service we received at check in was awesome. The doctor and his assistant was great communicating with my 7yr old grandson and made his visit there awesome. Thank All The Staff!!!!

I visited DR Wooten He is very through in his examination and explained the results to me clearly. All the staff who did initial eye checks were competent and kind in explain and implementing the testing. The check in and our procedure is easy and it was easy to get an appointment. I would recommend the clinic

I have been a patient of this clinic for approximately 20 years. I have always found the staff to be professional, efficient, courteous, and intentional in their service. My chronic eye condition calls for expertise, and I have found it here.

In publishing and graphic design, lorem ipsum is common placeholder text used to demonstrate the graphic elements of a document or visual presentation.